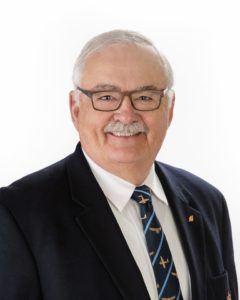 OTTAWA, ON (June 22, 2020) – The Air Cadet League of Canada (ACL) recently re-elected Mr. James (Jim) Hunter, from St. Albert, Alberta, to the position of National President at its 79th Annual General Meeting held on June 13th, 2020. The President, and all existing members of the Board of Governors were re-elected. Also elected were two new Governors, John Nolan from Ontario and Mark Brickwood from Manitoba. Of note, for the first time in League history, the Annual General Meeting was held virtually because of the COVID-19 pandemic.

In his presidential message to League members and guests, Jim thanked the members of the National Executive, the Board of Governors, the Provincial Chairs, the Advisory Council, and the over 8,000 League volunteers who so generously give of their time and talents in support of over 28,000 Air Cadets across Canada.

Jim’s first term as President saw a number of important initiatives take shape and come to fruition. A new Memorandum of Understanding was negotiated with the Canadian Armed Forces (CAF) and the Army and the Navy Leagues that redefines the support to be provided to the cadet program by the Leagues. The League played a key role in setting up the participation by six of our senior cadets in the American Civil Air Patrol’s Cadet Officer School at Maxwell Air Force Base, a course that the CAF fully endorsed and has committed to support in 2021. Also of note, the League supported the DND Review Services evaluation of the cadet program and continued efforts in establishing a better understanding of League funding pressures and exploring potential remedies.

Originally from Winnipeg, Jim graduated from the University of Manitoba with a Bachelor of Arts degree in History. After graduation, he pursued a successful career in Canada’s Air Force for more than forty-two years in various capacities, including Honourary Colonel of 15 Wing Moose Jaw. As a pilot, he trained on single engine jets and subsequently flew almost every rotary wing aircraft in the inventory. He served as an operational training unit instructor and qualified flying instructor, personnel and training staff officer, and Commanding Officer of 408 Tactical Helicopter Squadron. He also served as Wing Commander 15 Wing at the Canadian Armed Forces Base in Moose Jaw. After serving eight years in the North American Aerospace Defense Command (NORAD), Jim retired as a Brigadier-General in September of 2006. Between 2008 and 2015, he served as the Chief Executive Officer of the Regina Airport Authority. He is proud to be an Honourary Snowbird.

The ACL is a civilian non-profit organization that is dedicated to supporting the objectives of the Royal Canadian Air Cadet Program. This world class youth program seeks to develop the attributes of good citizenship, leadership, physical fitness, and to stimulate an interest in aviation and the Canadian Armed Forces.