Listed below are testimonials from those who’s lives have been touched by the Cadet program. To have your testimonial added to the website please send your submission to webadmin@aircadetleague.com 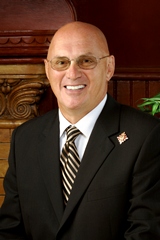 When I was growing up in the small Saskatchewan town of Saltcoats, I joined the 563 Saltcoats Squadron of the Royal Canadian Air Cadets. I had no idea what a huge impact Cadets would have on my life! I learned about public speaking and leadership. I learned to appreciate the importance of self-discipline, and to take pride in my uniform. To this day, I take the time to polish my shoes because I learned in Cadets about the importance of personal presentation. As Lieutenant Governor, I deliver hundreds of speeches each year. I enjoy public speaking thanks, in part, to the early lessons I learned in Cadets. Cadets gave me wonderful opportunities to travel. I was able to attend 2 summer camps on Sea Island, as well as Senior Leaders training at Camp Borden in Ontario. I even got to travel overseas to the Netherlands on an exchange. I had my first experience flying in an airplane in Cadets. Over the years, I have been required to fly a great deal for work, and I still love the experience! Cadets taught me about the value of hard work, as well as the importance of daily physical fitness. These are lessons that I have carried with me throughout my life. Cadets also gave me helpful mentors and good friends. My family didn’t have a lot of money, but thanks to the Cadet program, I was able to take part in all of these amazing opportunities. During my time as Lieutenant Governor, it has been a great privilege to serve as Reviewing Officer for numerous Cadet Reviews. I am deeply grateful to the Department of National Defence, the Army, Navy, and Air Cadet Leagues, and the committed instructors and leaders who make this life-changing program available to our promising youth. (563 Saltcoats Squadron – 1958-1963)

His Honour the Honourable Gordon Barnhart, Lieutenant Governor of Saskatchewan 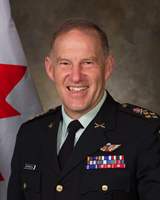 I started my own journey as an Air Cadet at the age of 13, having joined 220 (Red River) Air Cadet Squadron in Winnipeg, Manitoba. My decision to join the Air Cadet movement was based on my desire to become a member of an organization that offered me personal challenges and my passion for aircraft. Although I really enjoyed sports, I was also motivated by a strong desire to contribute to my community. The Air Cadets provided all of this and more. I attended Air Cadet summer camps at Penhold Alberta during the summers of 1972 and 1973. I went back to Penhold nearly 30 years later to see the current generation of air cadets. I told them that life was about choices. They had made a choice to join the Air cadets and in my view, it was one of the best choices they ever made in their lives. I have told similar groups of cadets the same message throughout my travels across the country visiting the various corps and squadrons. As the Chief of Defence Staff, I have absolutely no doubt that my formative years as an Air cadet served me well in developing self-discipline, determination and a sense of teamwork. As I have told so many young cadets: «You will be a leader in Canada and any one of you could be the CDS». (220 Red River Squadron) 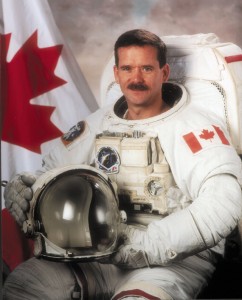 I dreamed of spaceflight. Watching the first humans leave our Earth to walk on another planet was a young boy’s dream, ignited. I thus clearly knew what I wanted to do, but had no idea how to get myself there. So I did some research. When I looked at what space explorers knew, I saw that they were aviators, engineers and test pilots. Growing up as a farm boy that looked great to me, but I needed to learn how airplanes worked, and how to fly. The Milton 820 RCAC Squadron had recently formed, so I joined and grew up with them from 1973-1977. The lessons I learned there I still draw upon daily: self-discipline, teamwork, technical competence, flying, and leadership. To be able to command the International Space Station in 2012/13, I know full well that it was the Air Cadet experience that allowed me to fly so high. Per Ardua ad Astra! (820 Chris Hadfield Squadron 1973-1977) 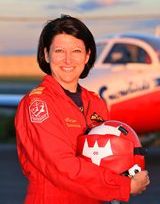 Being part of 630 Beauport Squadron of the Royal Canadian Air Cadets as a teenager, provided me anexcellent foundation for my career in aviation and with the Canadian Forces. I had the chance to be initiated to flying, learn about leadership, discipline, and aviation. Taking part in the various activities and participating in the summer camps gave me the opportunity to develop skills and personality traits that are required and used everyday in my present career: interpersonal skills, public speaking, reliability, discipline, and assertiveness. I was positively influenced by the friends I made and the mentors I had early on with the Air Cadets. The six years I spent with the organization certainly gave me the tools to attack life head on and work hard. (630 Beauport Squadron 1984-1990)

The Air Cadet program played a significant role in the achievement of my life’s goals and dreams. As a young boy I had a passion to fly and an interest in the military. Thus, it seemed a natural fit that I should join 614 RCAC Squadron in London Ontario at the age of 12. My time spent with Air Cadets was nothing short of tremendous. It was filled with many challenges and fantastic rewards, and its focus was much broader than the flying and military experience I expected. The program has something to offer for all of Canada’s youth. The highlights for me were the flying scholarships and the friendships. It would be many years later, upon further reflection, that I would truly come to realize the full extent of what the program had given to me. The leadership experiences and the challenge of flying had given me a boost of self-confidence and the courage to set an ambitious course for my life. I’ve never looked back. There are few certainties in life, but one thing I am absolutely certain of is that I would not be where I am today, were it not for the Air Cadet program. For that, I am most grateful. I take a piece of the Air Cadet program with me everywhere I go, and I look forward to taking it to space one day in the future! (614 Forest City Squadron 1988-1994)

I spent six years (1967-72) as an Air Cadet and then returned as an officer for seven more years all with 650 Vanier Squadron. I have had a great career in aviation and this is mainly due to my years as a cadet. I learnt the basics at school but the skills and knowledge that I picked up as an Air Cadet were what I would use every day, both as an Inspector for Transport Canada or as the CEO of the Moncton Flight College. Teamwork, self-discipline, communications and leadership are but a few of the critical life skills that I got with the Air Cadets. I also received my glider and power pilot licenses as well as my instructor rating on gliders. What a way to jump start an aviation career and have an incredible amount of fun while doing it. To this day I still live by 650’s motto “Nil sin labore” – Nothing without work”. (650 Vanier Squadron 1967-1972)

From a very early age, I had a strong interest in flying and learning everything I could about aviation. In 1984, with my family’s encouragement, I joined 132 Spitfire Squadron in Brampton and spent six excellent years as a cadet, followed by five years as an officer. I fondly remember all the camping trips, tours, summer camps, and parade nights that taught me the self discipline, leadership, and teamwork that have been vital to my success as an airline pilot and professor. I had so much fun learning the skills that I would eventually use every day in my career. I had no idea at the time how much my time with the Air Cadets would shape my future. I owe the Air Cadets a debt of gratitude because of all the opportunities I received: Summer camps where I learned to fly; an international exchange to Germany where I experienced a different culture; and the leadership skills that comes with progressing up the ranks as a cadet, to name a few. Most importantly, though, I think about the strong bonds and friendships that I formed. These memories and experiences will stay with me forever, and I encourage all young people to take advantage of all that Air Cadets has to offer. (132 Spitfire Squadron 1984-1990) “The cadets played an important role in my life. When I joined 51 Air Cadet Squadron in Ottawa, and then 783 Air Cadet Squadron in Montreal, I had no idea how the adventure and experience would influence my career. I quickly realized the value of the activities and diverse programs that were offered. During the course of the six years that I spent as a cadet, their programs provided me with decision-making skills that I still use today. Moreover, the guidance and advice I received from mentors helped me develop my leadership skills and their influence guided me to structure my education with clear professional goals. In addition, the constant challenges that were placed in front of me prepared me for my future. But above all, it is as a cadet that I discovered the fascinating world of aviation for which I developed a profound passion that still drives me today.” Growing up in Dorval, QC near a major international airport enhanced my early aviation passion. To learn more I joined 592 Canadair Community Squadron in 1956. It was a good fit. I looked forward to the meetings and, while holding down a couple of after school jobs, learned the importance of time management. Summer camps in Clinton, Greenwood and the Senior Leaders Course at Borden were exciting but learning to fly and participating in an exchange visit to the UK were special highlights. Lasting friendships were made as an Air Cadet. In addition to establishing personal discipline; teamwork, adaptability and leadership were stressed. Fitness was part of the learning package along with developing sound judgement. This extraordinary Air Cadet experience was exceptionally supportive during my time in the Canadian Armed Forces and afterwards in the Foreign Service while posted at Canadian Embassies in Europe, Africa, Middle East, Australia and the USA. My last diplomatic appointments were as Canadian Ambassador in Kuwait, Qatar and Iran. In representing Canadian interests in numerous geopolitically volatile parts of the world, the life lessons gleaned from those early Air Cadet years were essential in supporting many critical judgement calls; particularly those as the Canadian Ambassador in tough neighbourhoods far from home. By the way, I still love to fly airplanes/gliders and make good use of my pilot licence. Hats off to the Royal Canadian Air Cadet program! (592 Canadair Community Squadron: 1956-1960).

Aviation touches and impacts every element of our daily lives. It isn’t just about boarding an aircraft when we are fortunate enough to take a well-deserved trip; it is about international mail delivery, receiving packages overnight, sending food and supplies to remote communities…