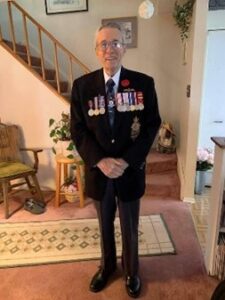 The ACL regrets to announce that BGen (Ret). Ronald B. Button, CD, has passed away August 20 in North Bay, Ontario, at the age of 94. Ron was a long-time Honorary Director of our League.

Brigadier General Ron Button retired from the RCAF/Canadian Forces in 1983 having served for 35 years.

In December 2017, he was awarded the Sovereign’s Medal for Volunteers. He was an ardent supporter of the cadet movement and of military families.  He has influenced positive change for others.

We are extending our condolences to his family and friends. Cremation will take place and a Celebration of his Life will take place at a later date. If desired, donations to a charity of choice or the North Bay Regional Health Centre will be gratefully acknowledged as expressions of sympathy. Arrangements entrusted to Basic Cremation Services.