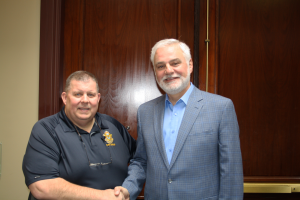 OTTAWA, ON (November 29, 2017) – The Air Cadet League of Canada is pleased to announce the appointment of MGen (retd) Pierre Forgues to the position of Executive Director effective December 11, 2017, replacing outgoing Executive Director, Mrs Sarah Matresky, after seven years of service as Executive Director and 12 years with the League.

“I am very honoured to have been selected to join the Air Cadet League of Canada management team.  I look forward to working with League members and our industry and DND partners in the development, deployment, and conduct of a world class youth development program.“, said the new Executive Director.

MGen (retd) Forgues joined the Royal Canadian Air Force in 1980 as an Air Weapons Controller in North Bay, ON and retired as the Commander of the Canadian Defence Academy in Kingston, ON, after a career in the Canadian Forces of more than 30 years. He has a well-established track record of leading and managing, and he is dedicated to the mission of promoting the growth and well-being of the organization. He brings to the table a vast experience in strategic planning, fundraising and non-profit management.

The Air Cadet League of Canada is a civilian non-profit community based and volunteer led organization which is dedicated to supporting the objectives of the Royal Canadian Air Cadet program, and to developing in youth the attributes of good citizenship and leadership; promoting physical fitness; and stimulating the interest of youth in the aviation and aerospace industry, including the air element of the Canadian Forces.