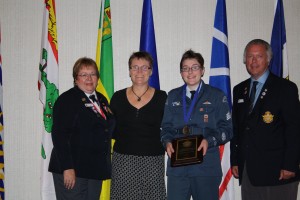 WO2 Pearl Barnes teaches aviation to all levels at her squadron, as well as music theory to the band members. She joined air cadets as a twelve-year-old when an officer came to her classroom to show the grade seven class what cadets had to offer. She then decided to join the Air Cadets program and since then, has been to camp every summer and has participated in the Power Pilot Scholarship program. She is currently enrolled at Oxbow Prairie Horizons School and is involved in drama, band, and yearbook committee.

Thank you to WestJet, main sponsor of the competition, for providing Pearl and all national finalists from across Canada with airfare.

The Air Cadet League of Canada is a civilian non-profit community based and volunteer led organization, which in collaboration with the Department of National Defence and our other partners, is dedicated to supporting the objectives of the Royal Canadian Air Cadet program, and to developing in youth the attributes of good citizenship and leadership; promoting physical fitness; and stimulating the interest of youth in the aviation and aerospace industry, including the air element of the Canadian Forces